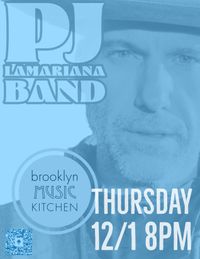 The PJ LaMariana Band is very excited to be playing Brooklyn Music Kitchen for the very first time!

PJ LaMariana is a New York City-based musician, songwriter, and performer. His music is a fusion of jam-rock, funk, and R&B. Over the years PJ has played with some amazing artists: Oteil Burbridge, Keller Williams, Merl Saunders, John Kadlecik, Frank Morgan, Michael Anthony, and more.

PJ has been cutting his teeth as a band leader in New York City's ultra-competitive music scene to rave reviews and return engagements. His band consists of seasoned musicians who bring an energetic excitement to every performance. You are going to dig the original tunes as well as the fun covers they throw into the mix.